The Body in the Library by Agatha Christie 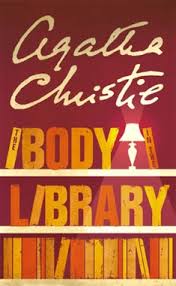 The Bantry's wake up to an unexpected visitor in their house. The servants have found the dead body of a platinum blonde in the Library, The Bantry's say they do not know who the girl is or how she got inside the house, but that denial by the Bantry's is no consolation to the wagging tongues of the villagers who accuse and start incriminating Colonel Bantry. Mrs Bantry realizes this fact and calls in the cavalry AKA the old St Mary Mead sleuth herself Miss Marple.

But then the Police find another body of a young girl whose is found burnt inside a car, is the body in the library in any way connected to the body in the car? Marple and the Police are confronted by a long list of suspects and a family whose head is a brave, crippled old man, but they all hide more then one secret.

Review: Dame Christie wanted to something sensational put a body of an unknown girl in the library of the most unobtrusive people and then unravel the mysterious puzzle from there. The characters are various in the book and all of them get a good amount of screen space, Christie puts them in situations where there personalities become vivid and colorful. I liked how she plays around with an old man and his muse, the idea of cripple age yearning for beautiful vivacious youth is appealing as a side story to the murder mystery.

This is another Marple book where we also see Sir Henry, I have read a few Marples and genuinely think her books on an average are better or as good as Poirot's, although the outstanding ones are from the latter. Also I have heard there is an inhouse joke about Poirot sorry but I couldn't spot it.

I will never ever agree to the way she solves crimes by giving some obscure village analogy and then using that to solve the crime it is just fantastic to believe that one can learn so much from a simple village life. but that said Marple mysteries are the de facto torch bearers of cosy mysteries and are very enjoyable.

This one starts out as a Cracker and ends in a whimper, figuring out the murderer is not very difficult. I was hoping to be proved wrong but was disappointed. I can't reveal much about that without giving something away. Read this one for the premise and the characters.

Where can you get this: Easily available online on FlipKart, Infibeam or any of the local stores, the cover is real nice go for it!
at November 15, 2011