Murder must Advertise by Dorothy Sayers 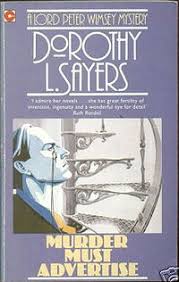 Mr. Death Bredon has joined the seemingly unobtrusive firm of Pym's Publicity. Pym is an Advertising agency where Bredon has joined as the copy writer. But very soon Mr. Bredon discovers that Pym isn't exactly what it seems to be and the reader finds out even sooner that Mr. Bredon isn't who he says he is.

Few chapters in the book and you don't have to be Henry Merrivale(god help you if you don't know who he is) to deduce that Mr. Bredon is actually the Aristocrat Lord Peter Wimsey, who is also an amateur sleuth and has joined Pym in the garb of an overtly curious copy writer to investigate the death of Victor Dean and to bust a smuggling racket.

Dorothy Sayers along with Agatha Christie forms the female mystery authors duo of the Golden Age of detective fiction. Lord Peter Wimsey was to Sayers what Poirot was to Christie.  Sayers wrote a number of mystery novels involving Wimsey. so now lets get down to the book review.


Dorothy Sayers is a very good writer and I will humbly try and explain why. She uses mundane situations and settings like that of an advertising firm and turns it into an interesting read. The reader becomes as much interested in the daily proceedings of an advertisement firm as the mystery itself. The author uses her command over the language to express the situation, so what I mean is that she is able to convey that there is a chaotic meeting taking place or there is tension in a room without actually saying it. After reading the book I felt she must have done a great amount of research on the workings of an advertising/publicity firm.

Sayers deals fairly well with the characters in the book. She introduces a lot of characters to the reader and  all of them are legible. The author creates some genuinely jocular situations in the book. I especially liked the part about Mr Copley an aging employee of the firm whose good intentions end up in a disaster.

We are also treated to a Cricket Match! Being Indian I love Cricket and there is a fun chapter about it in there. There is one jibe that an elderly gentleman makes in the book at a batsman who thinks that he was incorrectly judged leg before wicket

"Nobody ever is. I have attended cricket matches now for sixty years, for sixty years, my dear sir, and that goes back to a time before you were born or thought of, and I've never yet known anybody to be really out l.b.w.—according to himself, that is.” He chuckled again. “I remember in 1892....”"

lol so true even after 80 years.

I felt striking similarities between Sayers and Colin Dexter both of them have an excellent command over the language and both of them write very intelligently, also both of them made me learn at least 50 new words.

So we have established that Sayers is a good writer, is she a good mystery writer? No, I felt that the mystery was overshadowed by Pym's Publicity. The mystery in the first half of the book is good but it fizzles out in the second half. The most likely suspect turns out to be the killer and that just takes the fun away. Then his meek surrender in the end is just dreary.

The Detective, Lord Peter Wimsey is a Polymath. He has more skills than Leonardo Da Vinci. He is a Detective, an accomplished batsman, a horseman, a very good copy writer, an actor, an excellent swimmer, a very good driver, a gentleman and a scientist. All this from just one book in the series.

The book is still very good and the idea of how the drug racket is being operated from an unobtrusive place like Pym is genius. 3 1/2 Stars.

Where can you buy it? These Golden age detective books are not cheap, you can get it for around Rs 550 from flipkart.

I'm submitting this book as part of the British Book Challenge, and also as part of the Criminal Plots II 2012 for the section "Crime novel whose protagonist is the opposite gender of the author".
at February 01, 2012