Trial and Error by Anthony Berkeley 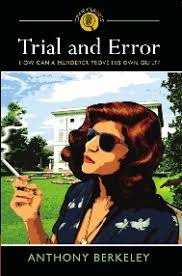 Plot: Shy and reclusive Lawrence Todhunter is suffering a fatal heart disease and before he departs he wants to do a final good deed for his fellow man. Todhunter arranges a meeting of  his close acquaintances and coaxes them in a academic discussion of what should be done by a person who wants the world to be a better place. To his utmost surprise the unanimous verdict is to commit murder! removing a vile and unscrupulous person would mean helping multiple people whose lives are troubled by this ignoble individual.


Todhunter takes up the advise and then searches for his victim. His search ends with Miss Norwood, a film actress who seduces men by the dozens and leaves them in destitution once she has ruined their lives. Todhunter commits a meticulously planned murder and shoots the "unlady" like Miss Norwood. Todhunter after committing this great act of valor and bravery goes off on a trip to Japan. but en route he receives news that a married man Palmer who was involved with Miss Norwood has been arrested for her murder.

Todhunter is appalled at this grave injustice and returns immediately to inform the authorities that they have arrested the wrong man and it is actually him they want, but the police think of Todhunter as dangerous as a box of kittens and dismiss him as a lunatic. Todhunter's desperate attempts to get Palmer exonerated end up in vain as he is found guilty and is to be executed for killing the famous actress.

Todhunter enlists a detective and a famous barrister to help him in prosecuting himself.

Review: The plot sounds fantastic, a man plagued by a fatal disease wants to do charity by committing murder. but his plan goes haywire when someone else is convicted for his crime and now he has to prove his own guilt which is not going to be easy. Is the fantastic sounding plot as good as Berkeley's brlliant novel The Poisoned Chocolate Case?


NO! Have you seen those kind of movies where the trailers are just awesome but the movie is a big disappointment, this book falls exactly in that category. When I started out with the first few chapters I thought this book might get a 5 star rating but as I continued to read, the book just kept on getting boring and boring till a time when I even contemplated of chucking the book altogether.

The plot had so much potential but it was so poorly handled by Berkeley. The only relevant plot details are in the Plot summary above and the rest of the book is just plain absurdity. It's filled with useless prattles, irrelevant details and inhuman like behavior from the characters. The book is full of people talking and acting illogically.

The Author wanted to show how brave and courageous the protagonist is, but instead he comes off as inhuman megalomaniac who behaves like a robot has no personality, no emotions and and the book is filled with his thoughts and inhuman reactions. For E.g. when Todhunter is put in jail he makes "friends" with the guards and if that isn't absurd enough he also finds his abode in the jail very comfortable. The Author does not let you forget that Todhunter can die any moment and keeps on pestering the reader with the same in every paragraph. Todhunter in my opinion is the worst character in detective fiction.

The book has farthing amounts of positives like the mystery which is given attention only in the last three pages in the epilogue. The first few chapters are well written and manage to get the reader hooked in the beginning rest all is unfortunately a disaster.

Now, its time to speak about the elephant in the room. Why does Mr Todhunter kill Miss Norwood? how does he go from having thoughts of killing fascist dictators like Hitler and Mussolini to killing a selfish actress. The reason I feel is that Berkeley used Todhunter as a tool. The misogynist undertones in the book are quite apparent. Todhunter does not go after the cheating husbands in the book but after the seductress, he expects woman to behave in a sudden manner and if they deviate from that pre-conceived notion women are branded as corrupt and diabolical. While the men are free to be promiscous because men are so stupid and innocent that it's never there fault. Just because she was immoral and selfish and longing for success and of course "unlady" like she should be murdered. Berkeley through Todhunter justifies her killing as a moral one and makes him a hero.

This is the kind of book that gives you reader's block


I'm submitting this review as part of the BBC and the Vintage Mystery reading challenge. was I over critical?