Dr Sanders, a forensic working on a poisoning case is walking back to his home after a long day at the office. In the middle of the night he is asked for help by a beautiful young woman who asks him to accompany her to a a certain Mr Felix Haye's flat. On reaching there he is shocked too find a gathering of 4 people who look like dummies, all of them have been heavily drugged and Mr. Haye is found murdered.

The Police find that the guests were poisoned by someone who rigged their drinks by putting atropine in their glasses. So what's so Carr(read impossible) about this murder? Once the remaining guests are revived, their statements corroborate that no one poisoned the drinks and that the glasses were watched all the time.

Add in the conspicuous disappearance of a prime suspect, another murder and a truck load of suspects and we have a case for the Old man. 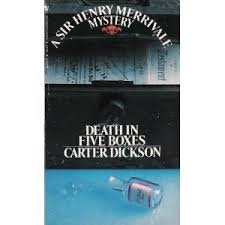 JDC is back and he is synonymous with locked room murders unfortunately we don't have one in this book. We do have a supposedly perplexing murder where no one knows how the victims were poisoned.  It is a below average effort from the master. Carr's books weave supernatural and the ambiance of dread and creepiness as naturally in the fiber of the story as humor was integrated in the works of  Mr P.G. Wodehouse. This is completely absent from the book so the USP of Carr is not there.

Another thing which I disliked about the book was that it felt stretched, it could easily loose 25-30 pages perhaps that could have made the book more appealing. A lot of content seem irrelevant and not tied to the main story. Of course whenever HM was on screen then time flew and you never noticed how many pages are left. The old man is the Leonardo Di Caprio of detectives.

Another bone that I have to pick with Carr is with his characterization of female characters in his book. They all seem dumb down versions of actual women who act like bimbos and keep doing and saying all sort of irrational and illogical things. The heroine of this piece is an exemplar example of this.

Its getting late in the night, I would like to close my review by saying that the identity of the murderer although well hidden does not give you the same pleasure as other notable Carr works. I would recommend this novel to purists and hardcore Carr fans. It does have its upsides like the chemistry between HM and Masters. How the trick was worked in poisoning the guests and the identity of the murderer.