I'm trying to expand my horizons by reading more non mystery books, I have become especially enthralled with books about Politics and History. I expect myself to read and review more and more books from this genre. I will continue to read mysteries but those are going to be rare as I have already read most of Carr, Christie and Sharadindu but will always be on the lookout for exceptional mystery novels. To the book review now...

John Sweeny, a former BBC correspondent for Panorama, travels to North Korea with a bunch of LSE students. John poses as a Professor of LSE to gain access to the enigmatic state. Free media is not allowed inside South Korea's poor cousin so John and his crew had to go undercover. BBC crew and the LSE students travel to different places in North Korea, starting from the capital city Pyongyang. All along the trip they are accompanied by minders who carefully plan their trip so the "tourists" are never able to see the real face of the totalitarian state, but that does not prevent the tourists to get a good glimpse of the horrors and absurdity that prevail in the communist nation. John keeps describing in each chapter the different places he visits in DPRK(official name of North Korea). He also keeps referencing to the immediate history of North Korea, how Kim Il-Sung took over North Korea n 1948 with the help of his Soviet allies and established a cult of personality in the country which would later be maintained and expanded by his son, Kim Jong-Il, who the author keeps referring to mockingly as "Bad Elvis" because of his obsession with Elvis Presley, the regime is now run by Kim 3, Kim Jong-Un, who according to the author is the Fat Kim.

The Kims have established an iron strong hold over North Korea, they are worshiped inside their country and any voice of dissent is crushed immediately. Being a communist state there is no democracy, people are not free to travel inside their own country, education is a luxury. The economy is in shambles, people are cut off from the outside world. Other communist regimes like China and Russia are only so called friends, even they are embarrassed by association with North Korea and treat them as a bargaining chip with the West. Like all dictatorships, the only people who are privileged and lead lives of extraordinary opulence are the Kims. The Kims kind of reminded me of the Gandhis, of course no Gandhi has ever been embalmed. I'm sure some Congressmen would have flirted with that idea. Congress even tried very hard to make Rajiv Gandhi a Kim Il-Sung type figure renaming every hospital, education institute, airports etc after him. Thank God Rahul Gandhi spoiled their plans :P

John also keeps retelling stories about defectors from North. The reader also gets to know about Gulag, Korean version of concentration camps which are situated high up in the mountains and act as torture chambers for political dissidents, real or imagined.

Even if half of the things in the book are true then this is not a different country but a country on a different planet. It's just plain weird. The people have been brainwashed into believing the religion of the Kims. They demand total obedience and perform bizarre rituals very much like the major monotheist religions. I could find very little difference between the cult of the Kims and monotheist religions both filled with mythology, oppression, subservience and greed.

The author is deeply critical of the North Korean regime, and he has every right to do so. But I could not help wondering and feeling embarrassed that there are so many similarities between India and North Korea to name a few: abject poverty, people travelling on top of trains resulting in loss of life and limb, rampant rapes, corruption, lack of medical services in rural areas and a divisive caste system which is deeply rooted in the Indian psyche. I also feel ashamed to be defending the North Korean regime on these points as these are not something easily curbed or controlled by governments. These are common in poor countries and especially common in states with strong communist influence, you cannot blame everything on the regime. In terms of human rights, economy and freedom of speech India is incomparable to the North. Only after reading this book you understand the pivotal importance of freedom of speech in a democracy.

To me, North Korea is fascinating, frightening and outright hilarious at the same time. Maybe when(If?) the regime falls we will get more insights about North Korea. The story about Doina Bumbea absolutely fascinates me, I can't stop thinking what happened to her?

North Korea is an interesting topic for me, In a lot of ways it is like reading a mystery novel, so many secrets. I think I would have liked anything written on it. 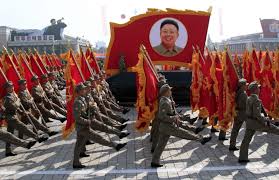