Its 1984, Punjab is burning. Sikh fundamentalists are spawning the flame of communalism. The movement for a separate Sikh state, Khalistan, is being spearheaded by the legendary Jarnail Singh Bhindranwale. Bhindranwale's popularity has reached a crescendo, hailing from the Damdami Taksal, the sikh educational organization, Bhindranwale became a symbol of resistance to the perceived hegemony of the Indian state in the minds of the ordinary Sikhs. Some Sikhs even branding him as the 11 Guru of Sikhs.

Bhinderwale had unleashed a host of terrors on the minority community and all who opposed him, he had unmitigated control over the affairs in Punjab and the elected government had just become a puppet. He had set up his base in the Golden Temple, which is the holiest shrine for Sikhs and had put up personally over the room above the Akal Takht. Golden Temple had been turned into a military fortress with fortifications on all side, backed up by motivated, hardcore fundamentalists Bhinderwale looked invincible. Reports from the temple suggested that there were at least 500-600 militants holed up inside threatening the security and integrity of the Indian state.

While Lt Gen KS Brar fails to go into any details about the reason for discontent in Sikhs, he goes into intricate details about the Blue Star operation itself. Brar, a Sikh himself was handpicked to conduct one of the most dangerous and emotionally charged operations.


On June 3, 1984, Indian Army had completely surrounded the temple complex in Amritsar. A curfew was imposed and the borders with Pakistan were completely sealed in preparation of the impending attack. It was feared that Pakistan who were still hurting from the 1971 defeat might try and interfere.

On June 4 they attacked. The operation did not go as planned, the Army suffered heavy causalities especially along the areas surrounding the Harminder Sahib(sanctum sanctorum of the Sikhs), as the Army was instructed not to fire in the direction of Harminder Sahib many lives were lost. The Army was put up against a motivated, heavily armed, religious fanatics backed by a capable and charming leader.

Indian Army was in big trouble, the fire coming from the Akal Takht was overwhelming for them, so they did the unthinkable, Tanks were brought inside the Golden temple which started firing on the Akal Takht. Heavy causalities were now being inflicted on both sides, Many major portions of the temple complex were damaged and a lot of brave army Jawans had fallen. In the aftermath of religious ferver and politics of riots everyone conveniently forgot the Jawans who laid down their lives for the motherland and fought with overwhelming odds.

Finally, Bhindrewale was killed along with his bodyguards and his right hand former Indian military officer General Shabeg Singh. With their deaths the battle for Khalistan was lost, their was significant damage on the temple complex. Akal Takht building was shattered and blood was flowing ceaselessly in the Golden Temple. The Sikhs could never forget this attack and they took revenge on 31 October , 1984, Indra Gandhi was assassinated by her own Sikh bodyguards, she was gunned down. What followed was a systematic genocide in the capital of the largest democracy in the world, countless sikhs were killed by the Congress Party.

Operation blue star and its aftermath left an indelible impression in the minds of Indians. KS Brar, who commanded the operations provides an account from the military perspective, which seems unbiased on face value and well written. I would like to read more on this topic but this book is a good start. 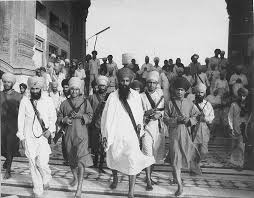