East Pakistan(present day Bangladesh) was in turmoil. West Pakistan dominated all aspects of East Pakistan. Although East Pakistan had more citizens than the West, but they had feeble representation in the Government and even lesser in the all powerful army. The Army which is by far the most dominant institution in Pak used to look at East Pakistanis as dark skinned lesser Muslims who were on friendly terms with their Hindu minority, on the other hand the Pakistan army dominated by Punjabis considered themselves a martial race and pious Muslims. East Pakistan was given step brotherly treatment in terms of investment and military support. Mujibur Rehman, head of the Bangladeshi Awami league wanted greater autonomy for the Bangladeshis but Pakistan headed by the Military dictator General Yahya Khan would never allow it. Yahya declared elections in Pakistan, which the Awami League trumped and Mujibur was all set to head the country but the army would never allow him to take charge. If Mujibur heads the country than Punjabis and in turn the army would lose their grip over the Islamic state.

Yahya dissolved the assembly and took over power(he was supposed to relinquish control to the civilian government). Yahya ordered his troops to kill members of Awami league, and arrest Mujibur Rehman. Then the Pakistan army proceeded to commit the most brutal and gruesome genocide in recent history. 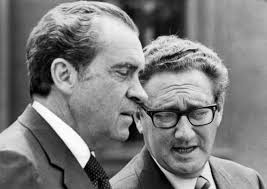 Pakistan Army systematically started killing tens of thousands of Hindus. Whole Hindu villages were raped and  murdered. It is estimates that around 400,000 Hindus and Bengalis were massacred by their own Army. Millions more were displaced, Pakistan Army wanted to kill 'n' number of Hindus so that n*10 would flee their homes and cross into India. This would purify East Pakistan of the Hindu Infidels.

Yahya and the Pak Army were of course funded, supported and backed up by America. Richard Nixon considered the dim witted, alcoholic army dictator Yahya as a personal close friend. Henry Kissinger saw the Pakistanis as a tool to be used for fomenting ties with China. Yahya who was close to both China and USA would act as a conduit to bring the two countries together. Kissinger saw this as the diplomatic coup of the century which would secure his legacy for ages, the small problem of hundreds of thousands of Hindus and Bangladeshis being killed and raped was of course a minor irritant in the American and Chinese grand design.

India, a poor, third world democratic country was being overwhelmed by the influx of millions of  refugees. The secular fabric of the east part of India was being changed which by the way we are still struggling to cope with. Each Refugee bought with him/her story of the horrors unleashed by the Pak Army. Rape Concentration camps, killing of men if they were not circumcised and unending firing and bombing of Bangladesh. Indians were outraged by the genocide and mass murder by the army on its own people. India raised an outcry and wanted the International community to come together and condemn Pakistan, but she was left all alone. Pakistan backed by the home of the brave and the free continued to kill thousands of people everyday as not even one country came to side with India. No one wanted to stand up against the might of the Americans and the pearl of the Islamic world. Kissinger and Nixon were especially vitriolic against the Indians and deemed them bastards and untrustworthy. Officials record showed that Nixon called the then Prime Minister of India, Indira Gandhi a 'bitch'.

Indian Army had by now started arming and training the Bengalis, the Mukti Bahini was born. With their slogan of 'Jai Bangla' they started to bleed the Pak army. Made up mostly of Bengalis who served with the Pak Army and refugees. Mukti Bahini executed a plethora of spirited campaigns but this was not enough, the Pak Army was well equipped and trained with the backing of Nixon, Kissinger and the Muslim world.

On 3rd December 1971, The Indian Army headed by the legendary Sam Manekshaw went to war. The campaign was swift and brilliantly engineered. Indian army made mince meat of Pak Army.
Kissinger and Nixon were enraged, their genocidal ally was being trumped by the behemoth of South East Asia. Kissinger wanted the Chinese to move their troops against India, which would scare the Indians who would call of their aggression. None of the American antics helped, General Jagjit Singh Aurora negotiated a surrender of the Pak Army. East Pakistan was liberated and the Mukti Bahini and Indian Army, led by General JFR Jacob, General Aurora and chief of army Manekshaw were seen as liberators who were celebrated across Bangladesh.

Americans were distraught on learning that their ally had lost one half of their nation, so Kissinger and Nixon decided to do the unthinkable. They moved the nuclear powered warship, USS Enterprise in the Bay of Bengal against the Indians to deter then from moving troops towards West Pakistan and to remind them who is backing the genocidal military dictator of Pakistan. India was always unofficially supported by USSR, which acted as a deterrent to the Americans, who would have crushed India like India crushed the Pakistanis.

The Indians of course don't see themselves as sanctimonious defenders of freedom, India knew that splitting Pak would be strategically important as they could not have two hostile neighbors. Some people consider the US actions to have spooked the Indians so much that they now wanted to invest in a Nuclear Bomb.

Mujibur Rehman was made the head of the country. Yahya Khan was thrown out of power and was replaced by Bhutto. Nixon was tainted in the Watergate scandal and had to resign, Kissinger went ahead to become one of the greatest foreign affairs expert and served more Presidents.

There is also a minor role played by Archer Blood, who was the US Ambassador to Dhaka and sent a dissent telegram against the US policy in Bangladesh.

To Kissinger — who comes across as a cold-blooded practitioner of realpolitik given to rages when he doesn’t get his way — the Indians were “insufferably arrogant,” with “convoluted minds.” At one point on the tapes, Nixon remarks, “The Indians need — what they really need is a” — Kissinger interjects, “They’re such bastards.” And then the president finishes his thought: “a mass famine.”

The book was an eye opener, sublime, reads like a thriller. Dark and Chilling. Exposes America and China and Pakistan's Hitler, Yahya Khan.