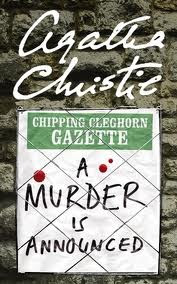 After reading countless murder mysteries, I have decided to share my thoughts about the books that I read, I really enjoy reading Classic Mysteries and can't think of a better way to spend my time, I have read a lot of Agatha Christie's but John Dickson Carr is my favorite author he truly is a man who explains miracles, like the majority of the reading population, my favorite detective is Hercule Poirot.


In the coming months, I'm going to read, review and then post my thoughts and comments on books by Agatha Christie, Ellery Queen, and John Dickson Carr


Also my blogs are going to be spoiler free, which means I would not discuss or reveal about Whodunit? Also all books reviewed would be Fair play detective fiction - these books are challenges to the reader, The idea is that readers should be able to solve the crime along with the detective, if their wits are sharp enough. The rules of fair play prevent the author from throwing in unforeseen surprises that would prevent readers from solving the mystery themselves. Basically the rules state that there must be no bizarre breaks or surprise solutions that are hidden from the reader until the end and that the reader must be in possession of all the clues; nothing should be withheld by the author.


A murder is announced is part of the Miss Marple series, I was really put off from Miss Marple after reading 13 problems, which had thirteen stories and most of them were not the best works by Agatha Christie and here Miss Marple's approach in solving the crime was same in all stories, I had promised myself not to read Miss Marple again, but then from a highly recommended source came A Murder is Announced – which many people claim to be the best in the Miss Marple series.

The villagers of Chipping Cleghorn are agog with curiosity over an advert in the gazette which reads - A murder is announced and will take place on Friday October 29th, at Little Paddocks at 6.30pm, a childish practical joke? Or a hoax intended to scare poor Letitia Blacklock? Unable to resist the mysterious invitation, a crowd begins to gather at Little Paddocks at the appointed time when, without warning, the lights go out and a gun is fired! When they come back on a Murder which was announced has taken place and suddenly the sleepy town of Chipping Cleghorn is awakened to Mystery and Death.

Perhaps if I had read A murder is announced before thirteen problems, then I would have not stayed away from the Miss Marple series for such a long time, this is an engaging mystery and with a very interesting premise and is quite fast paced, the characters are well written and the humor part is not missing, the book has many suspects which is always good.

The feeling of some shire type village and a murder in the midst of it gives the book a good ambiance. Miss Marple is unusually active in the book, and even cooks up a scheme to catch the killer red handed, but my problem with Marple is her constant references to her village life and her not really doing any actual detective work( she just sits and thinks), that said the story is good but for me but the killer is predictable, after reading many Christies this is something you begin to catch from the clues.