The Judas Window by Carter Dickson 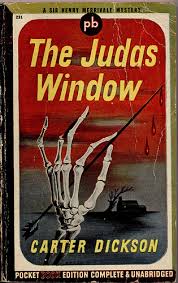 so first a bit of background, the Judas Window is written by my favorite author, I was introduced to John Dickson Carr by a blog which I regularly follow and I will be thankful to that man forever, John Dickson Carr is the master the de facto master of the locked room mystery, his novel the hollow man was voted as the greatest locked room mystery of all time, you might ask me now that what is a locked room mystery? It is a crime—almost always murder—is committed under apparently impossible circumstances. The crime in question typically involves a crime scene that no intruder could have entered or left, a locked room. Following other conventions of classic detective fiction, the reader is normally presented with the puzzle and all of the clues, and is encouraged to solve the mystery before the solution is revealed in a dramatic climax.

Young James Answell goes to the house of his future father-in-law to ask him for the hand of his daughter for marriage, when his father-in-law offers him a drink, he feels sick and drowsy after taking a few sips, then he hears his father –in-law scream “have you gone completely mad” as he fades away into unconsciousness, when he wakes up he finds the room locked from inside and the two steel windows shut from inside, and sees his father-in-law stabbed by an arrow which has gone through his heart, James Answell is a dead man – there was no one who could have got inside and no one went outside, there are no hidden passages inside the room, the only logical conclusion is that James Answell killed his future father-in-law or did he? Only Henry Merrivale think he is innocent and takes up the case of the Judas Window.

This was the first John Dickson Carr book I read and become a fan for life after reading just the first 5 pages, the book is a engrossing, fast paced and a mind numbing mystery, there is no supernatural element involved and has a perfectly understandable and logical solution, the book unfolds in a court room where HM defends the accused, I’m surprised that there aren’t many films based on this, In the British prison system, a "Judas window" is in the door of a cell and enables the guards to observe prisoners without being seen themselves. But Sir Henry Merrivale points out another Judas window that is in every room, but that no one notices, this is perhaps one of the best books ever written and it’s a pity that it’s not well known to the general public, the book has twists and turns all of the way and once you start reading you will keep talking about it till you finish and even after you have finished you will marvel at the ending and the locked room mystery genre, this is a must read.