Murder in Mesopotamia by Agatha Christie 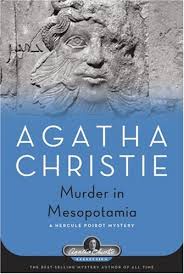 Agatha Christie married archaeologist Max Mallowan in 1930 (she was 40, he was only 26 -- Go Agatha!) and thereafter spent months at a time every year (with the exception of some years during WWII) in the Middle East on digs. She wrote many of her novels in a small mud closet with only a card table to hold her typewriter and a wooden chair to sit on. The locals actually considered her very extravagant for this. She also helped clean, sketch and photograph the artifacts they uncovered.


she now used her experience in Iraq to write a character study of the interplay of personalities on an archaeological dig. The characters of Dr. Eric Leidner and his wife Louise were based on people Christie knew in real life, famous archaeologist Leonard Woolley and his wife Katherine.

Louise Leidner--"Lovely Louise," as she is known in Iraq--is a compelling woman. She is beautiful, intelligent, and confident--but she's also a bundle of nerves. She hears tapping on her window, sees ghostly faces hovering outside, and receives threatening letters which may or may not be written by her supposedly dead former husband. Nurse Amy Leatheran--sensible, experienced, kind but tough, has been hired to be her companion, and acts as our narrator as well.

It's really no surprise when Louise is murdered early one afternoon. After all, this charismatic woman has been adored and reviled in equal measure--often by the same person!--by everyone on her husband's archaeological dig. All have a motive, all have the opportunity...and most have an alibi.

What's the local constabulary to do but call in Hercule Poirot, passing through on his way to Baghdad. Poirot, always up for an intriguing case, enlists Nurse as his assistant, and together lead to a most surprising conclusion.

Christie attempts a locked room mystery with this one, and to me her solution leaves a lot to be desired, this is not Christie's strongest work. I for one could not believe when the murderer is revealed not only is the hidden identity of the murderer improbable but also illogical, I mean Louise would have to be blind to not have noticed who the person behind her grievances is and also the book talks about tension among the group in the dig but the tension is never felt in the book by the reader, although I liked the characters in the book and pace of the novel but the revelation in the end is absurd.