A pocket full of Rye by Agatha Christie 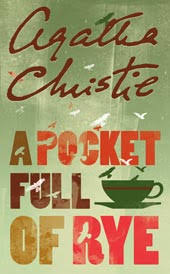 This one was written in 1953 and is a typical cozy English mystery with lots of murders and even more suspects, the title and cover of the book are highly attractive.

Plot:
A Highly successful Banker after drinking a cup of tea falls seriously ill and dies within hours from poisoning, the banker's pockets are found to be full of rye!! no one knows why there was cereal in the dead man's pocket until his wife is also poisoned eating bread and honey and his maid is found strangled with a clothes pin on her nose, Miss Marple deduces that someone is arranging the murders along the nursery rhyme Sing a song of Sixpence, is someone extracting revenge on the family? or is there a madman on the loose or something even more sinister?


Sing a song of sixpence,

A pocket full of rye.
Four and twenty blackbirds,
Baked in a pie.

When the pie was opened,
The birds began to sing;
Wasn't that a dainty dish,
To set before the king?

The king was in his counting house,
Counting out his money;
The queen was in the parlour,
Eating bread and honey.

The maid was in the garden,
Hanging out the clothes;
When down came a blackbird
And pecked off her nose.

Review:
This is the third book that I have read in the Miss Marple series and my interest in the series has only increased, the difference between Miss Marple and other detectives I feel is that she is not all over the place she appears in parts briefly in her books and then comes in the end to provide an elegant solution, here in A Pocket full of rye I don't think she makes her appearance before the first 125 pages. The book in it self is a nice read, the characters are well written and interesting. The mystery is intriguing and the plot with victim having his pocket full of rye is quite enthralling, I would highly recommend this book to someone who is new to the genre but for me I was able to figure out the Identity of the murderer halfway through the book, once I'm able to figure out the Identity of the murderer and then it is corroborated, I feel a little disappointed that is because I love to be surprised by the twist endings. that said the book is still very interesting and Miss Marple books are supposed to be workable, light and easy mysteries.

Where can you find it: this is easily available in local bookstores and can also also be ordered online from Flipkart.