The Hollow Man aka The Three Coffins by John Dickson Carr 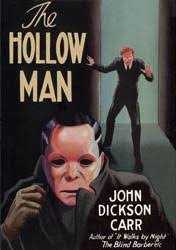 A murder has been committed on the Cagliostro street by an invisible killer, there were witnesses and yet they saw nothing, there was snowfall and yet no footprints and there were whispers but no clue as to who spoke them.

But then there is another murder and this one even more baffling. Professor Grimaud a man who studies the Supernatural is found shot in his room by an apparition who wore a child mask and had black hair which look like they were made of paper mache.

A few days before Professor Grimaud is murdered, he is threatened by a strange man who reminds him something about his past. Petrified and worried the professor does something strange, he goes out and buys a large painting of three graves with the backdrop of a gigantic tree in an unknown country. Was the professor trying to protect himself by a charm?

The murderer had locked the professor in a room with only two entrances, a door which is being watched by two witnesses and a Window 50 foot high. After shooting, when the door of the room is broken down there is no sign of the murderer. He could not have gotten out of the door as there were two witnesses who swear they saw the childish mask wearing apparition go inside but not come outside, then there is the impossible situation of the Window, which is 50 foot high and anyone jumping outside the Window would surely leave footsteps outside on the snow but there are none. so when the poor professor is found shot in his study he is alone and there is no trace of the killer who is lighter then air and is surely the Hollow man.

The start of the story is a cracker, it is absolutely mystical and intriguing. One impossible locked room murder committed under creepy circumstances by a guy who looks right out of the Halloween movies and another one in the middle of the street with witnesses who say they saw a man die but did not see the killer! The Hollow Man was voted as the best locked room mystery of all time by a panel of mystery authors and reviewers and I don't want to challenge them, but the ending and the explanation is way too complicated for me, I would have liked something a bit simpler like the Judas Window or the Reader is Warned. That said this novel has too many great things and very few negatives, for example the famous locked room lecture by Dr. Fell.

In the lecture Dr. Fell address the readers and tells them various methods in which a hermetically sealed locked room can be constructed and then challenges the reader to find out which one was used to murder Professor Grimaud.

Where can you buy it? Infibeam or try Landmark, this is not easy to find and you might have to shell 500 bucks
at October 16, 2011