One Two buckle my shoe by Agatha Christie 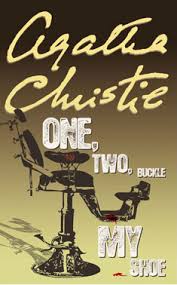 There is a common nemesis for the elite, the powerful, the rich, the sly and the brilliant it is their Dentist. Hercule Poirot's Dentist is found murdered after his visit and so Inspector Japp calls on Poirot to help him solve the case as it involves the wealthy and powerful banker Alistair Blunt who might have been the target in this case but the unlucky dentist ended up dead.
Blunt is England's Banker. part of the old guard who is a symbol of stability in the times of the second world war. His dentist getting murdered minutes after him leaving the clinic is worrying for the government and they don't want to take this as a coincidence. Another curious incidence takes place an American whose name is difficult to spell then "arnold schwarzenegger" gets murdered. He visited the Dentist right after Blunt and now the police, government and Poirot are deeply worried.
Poirot is thrown into a world of Politics, Deceit and Spies and how he loves it!
Review:
Reading about the infallible Poirot getting scared of the dentist's chair and then taking advise from a retired home officer should be worthy enough to warrant a read. Throw in there a triple murder and political intrigue and this one goes off the charts. The third murder is extremely brutal and the way Christie narrates the aftermath is vivid and not for the weak hearted. Poirot's little speech in the end is enjoyable.
I wanna add that Poirot working alone is Golden. I always find that his association with Hastings provides with some of the weaker stuff, but not everyone thinks that. all in all this one's a hidden gem and very underrated. If I ever do a poirot top five I might find space for this one.
Where can I buy this: you can get this easily from any bookstore like Om or Landmark and online from Flipkart. All Christie books are dirt cheap
at October 01, 2011