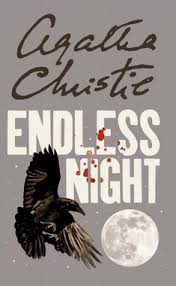 Endless Night by Agatha Christie
Michael Rogers is a young and handsome fellow, who one day dreams of owning his own house and living there with the women that he would love. The only obstacle in his dream coming true is that he does not even have a farthing. Michael does odd jobs and never stays at one job for too long, his life is aimless and stuck in an endless loop. But everything changes for Mike when he meets Ellie.
Ellie is a sweet, beautiful 20 year old who also apparently happens to be an American heiress to an oil empire. Ellie has lived a protected life and her overbearing family has never her let live freely, she wants to get away from America and has come on one of her escapes to England from her mundane life. A chance meeting between the two sets the ball rolling. Ellie and Mike meet at the Gypsy’s Acre a piece of land which both would want to be theirs. As they keep on seeing each other, they become more and more affectionate towards each other. They talk about Gypsy’s Acre and how they could have a brilliant house there once they get married. Sounds like a nice love story? Sorry this is “Agatha Christie” they don’t call her the Queen of crime for nothing.
Gypsy’s Acre is cursed. So says the local legend and the gypsy who lives nearby she warns both of them about the impending doom if they buy this land and built a house here. But the young couple ignores the ramblings of a half witted Gypsy and does just the opposite. They employ a genius but critically Ill Architect who completes his last masterpiece, they move in their house and strange occurrences begin but as all the people involved will come to know Gypsy’s Acre really is cursed and people who live there, their lives often end in tragedy.

Review:
I have often stated that in my opinion Christie’s best works are the ones that are from her non series i.e. don’t have the famous Belgian Detective Poirot or the St Mary Mead’s Super Sleuth Miss Marple. Endless Night corroborates my inference.
The narrator of the book is Mike Rogers, and out of the entire list of narrator’s in Dame Christie’s books. I think I have liked Michael the best. He is not very sophisticated and sometimes puts things curtly which is different from others. He lets you dwell deep inside his mind without giving the impression that he is doing so. He describes all the characters very vividly and also lets the reader know of his impression of what their impression is of him.
The Mystery does not start till the final part of the book which is last 70 odd pages. But I think the author was not trying to write a simple detective book. She wanted to do something different she wanted to create an atmosphere so strong that when you read the final pages of the book it hits you so hard that it gives you Goosebumps.
I guessed the murderer in the pen-ultimate chapter, but I thought to myself that if this does turn out to be the case then it would be fantastic, and while reading the last final pages I started getting the chills as I realized that I had been right. You have to read this one to understand Dame Christie was the best at what she did. She turned a dreamy, hazy love story into a bone chilling murder mystery.
Ratings: Deducting half a star because the mystery part comes in very late.
at December 08, 2011