The Mystery of the Yellow Room by Gaston Leroux 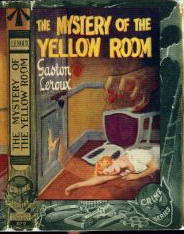 
Professor Stangerson a famous scientist on the cusp of success in his ongoing experiments is living in a Chateau outside Paris. One unholy night the professor's daughter who is also assisting the professor in his work is found grievously injured in the yellow room. When the door to the room is opened which is the only entry and exit to the room it is found that there is no one inside the room.

The Yellow room is the locked room in this book. and if you are a jd carr fan like me then you know that the locked room is the most interesting thing on God's green earth. In this book : The room has one exit which is the door and the other exit is a steel barred window, there is a bed in the room and few other furniture, and no hidden or secret passages. The solitaire door to the room is watched by the professor and his faithful servant, they were working outside the yellow room in there lab when the incident happened. after hearing the cries of the daughter, professor and the servant somehow manage to get inside the room but find no one there. how can someone hurt Miss Stangerson if no one was found inside the room? no one was seen coming and escaping from the room. The Windows were not tampered with and so was the door. The Baffling case becomes an enigma for the police and a Monica Lewinsky scandal for the media.

Can the 18 yr old solve this case and prove the great french detective Larsan wrong? or will the yellow room always remain an enigma.

The Yellow room is written by Gaston Leroux also known worldwide for The Phantom of the Opera, you read the first 20 pages and you understand why JD carr called it the "best detective tale ever written" but that is where the best part ends the book becomes a drag after that, It feels like the author just wants to procrastinate the end, honestly I would have want to cut the novel short because although there is a lot happening in the book, the characters feels very far you do not relate them. I can say in criticism that they are not well drawn and are not seamless.

About the detective, Rouletabille: he is a journalist, but he in no Tintin. Rouletabille to me as a wannabe Sherlock Holmes who fails to create the same aura as that of the Baker Street resident. He says curious phrases to people in the novel and they react even more curiously and these phrases make no sense or reason and also Rouletabille discloses or discusses the case very little.

The Mystery and the murderer are the saving grace of the book it is no doubt an unbreakable locked room and the murderer reminds you of another ending of a famous Agatha Christie(I won't say which because this is a spoiler free blog). The explanation of the assassination attempt is satisfactory but like all locked room endings you have to be a little credulous to buy into it.