The Case of The man who Died Laughing by Tarquin Hall 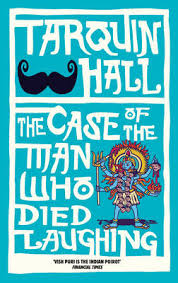 Vish Puri, a Punjabi detective and owner of the "Most Private Investigators" detective agency is embroiled in a case of biblical proportions. Dr Jha, a rationalist and staunch Atheist has been murdered by the hands of Goddess Kali! In Hindu mythology Kali, is the foremost among the ten fierce Tantric goddesses. Witnesses at the scene describe seeing a 20 foot apparition of Kali, at the sight of the dreaded goddess they froze at their spot as an enigmatic mist began to veil their surroundings, then the consort of Shiva leaped several feet in the air and struck Dr Jha in the chest with her Schimtar.

The Delhi Police Inspector who is given the job of investigating this supernatural crime, realizes that this case is out of his league, corollary he calls Vish Puri, the Punjabi version of Hercule Poirot. Vish Puri or "Wish Poori" together with his team of agents, against the back drop of Delhi and a quintessential Punjabi family try to solve this most peculiar crime.

This is the first time I have read a mystery novel which is set against my own Delhi and being a pure Punjabi I  found it absolutely humorous as well as nostalgic, as I was able to travel all the places which I have grown up in and used to visit regularly.

The author provides an outsiders point of view on us Punjabis(the ones living in Delhi), it makes me realize how supercilious, hearty, magnanimous and illogical Punjabis are, without stereotyping anyone I felt the author really was able to describe how most of us are. We feel that we are a superior race and don't let other communities in India forget that, and also treatment meted out to people from "poorab" east (Bihar, UP) is correctly depicted, although the book does have some factual discrepancies. Punjabi Bagh is shown as an area which is not a well to do area and is no better than an average Delhi colony, this is farcical as Punjabi Bagh is perhaps one of the most upmarket areas in Delhi with perhaps the most influential and powerful businessman in the country, in addition the real estate prices in Punjabi Bagh speak for themselves.
At other places the authors research concerning Punjabi food, traditions and drinking habits is quite accurate.

Having read quite a few books, I always used to question my Intellect on not being able to comprehend dialog between Englishmen when they used to refer something acutely English or when the author used to introduce Latin or French verses but Hall reverses the tables, by using Punjabi and Hindi the author provides that authentic touch of being in the heart of Delhi.

The Characters that Hall creates are cute and cuddly, Mummy ji, Puri's brother in law and Puri himself will leave you in splits, their shenanigans will cause you to take your mind off the mystery and then you will be struck on the head with the mystery which is an added plus in this book, the killer came as a surprise and hit  me out of the blue.

The book has a big weakness which is the pedestrian explanation of the grandiose mystery, It is a little difficult to believe that such an intelligent author gave such a cop out solution to the mystery, even that was not well explained and much was left to the readers imagination.

Another quibble in the book is the harsh treatment that right wing Hindu groups get from Hall, although some of the criticism is genuine but I felt most of it was born out of the author's obscure understanding of our political and social situation. Hall does give the godmen in the book what they deserve, this ignoble lot who thrive on superstition and gullibility of the masses are wolves in sheep's clothing. Hall shows them in their true colors.

This is a welcome break from all the English mysteries, although it is written by an English author. Nice, easy read. 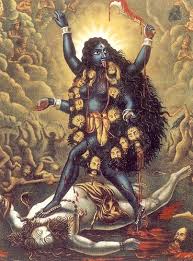