The Pale Horse by Agatha Christie

A priest is called upon to attend to a dying woman, the woman makes the priest privy to a wicked secret before taking her last breath. The priest is found next day murdered and inside his shoe is hidden a list of names, who are these people? are they victims of a conspiracy or the conspirators?

Mark Easterbrook, is a Writer/Historian who gets mixed up in this story. Easterbrook finds out that there is a place called Pale Horse, whereac deaths are arranged. Mark is deeply intrigued and starts finding out more about this place and even arranges a visit. It turns out that the Pale Horse in an old inn that is now inhabited by three spinsters who claim to be witches, people say that using the occult these women can eliminate impediments and can cause people to suddenly fall sick and die. The usually suave and highbrow Mark, now begins to wonder is there more to these seemly harmless but eccentric women or is this is all the result of an over zealous mind.

Mark and the police try to connect the dots, how is the murder of the priest, and a host of seemingly natural deaths related to the Pale Horse. In order to uncover the truth, Mark plays a dangerous game and risks the life of one his dear ones, but to consequences that even the witches cannot foresee.

Another non series from Agatha Christie, and another decent cozy mystery from the Queen of crime. This one even has a hint of supernatural thrown in, but it is not as strong an element as it is in some of Carr books. Christie is not very good at creating atmosphere, she succeeds only 3-4 times out of 10, but what she is good at is writing intricate plots, and the plot in this book is A class. It is fresh, very well thought of, and extremely enjoyable too read. 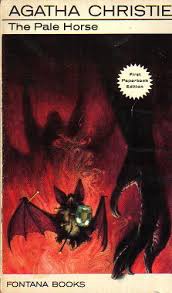 The Characters in the book are again enjoyable, there are no weak characters and the reader is not given too much emotional babble from any character and instead the author continues to focus on the mystery which is right up my alley. The identity of the murderer is easily decipherable, it is  so easy that even a kid could do it. Had the murderer not been so easy to spot, I would have definitely awarded this an extra half star.

The book written in 1961, is around 330 pages and you can breeze through it in a day, the language is simple and typical Dame Christie, neither highbrow nor cattle class. It is the kind of book you should read when you have a reader's block. The paperback edition from Harper Collins costs around Rs 130 and can be bought from any online book store.

I'm entering this review as part of the Color coded challenge as a book with a word that implies color and also as part of the Agatha Christie Carnival. 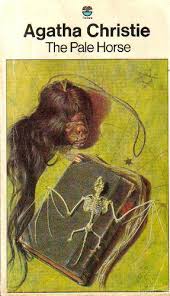