The Pope and Mussolini by David Kertzer

The period between 1930's to mid 1940's was one of histories darkest yet richest. In it we saw the rise of a galaxy of political and military leaders like Adolf Hitler, Gandhi, Nehru, Jinnah, Churchill, Stalin, FDR etc. One figure out of these galaxy of leaders was Mussolini, for me Mussolini had always remained an intriguing and enigmatic figure. The media has been bullheadedly focused on Hilter for the past several decades thus for us non-Europeans Mussolini and his fascist band has remained in the shadows of their Nazi counterparts. This tome by Mr Kertzer brings to light not only the rise and fall of Mussolini, along with his fascist party but also the rise and fall of Pope Pius XI. During this tumultuous time the Roman Catholic Church had one of its best leaders at its helm, Pius XI was tenacious, iron willed and aggressive.

The book explores the journey of the two men, Pius and Mussolini. Both, had humble origins, both Italians rose to the top of their respective domains. Although the two headed very different institutions, one being the head of an extreme right political party and other, head of the biggest religion in the world, still the two had ample similarities.

The Church and the Fascist were initially opposed to each other. The two representing completely different ideologies, Mussolini was in fact, a self confessed agnostic and looked at the clergy with contempt. Mussolini soon realized in order to capture power in the catholic dominated Italy he would have to ally with the Pope and the institution that he found most odious. 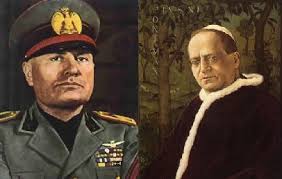 The Pope also knew of his restrictions, the pope's backed political party had failed to capture the imagination of the people. Pope was also worried about the proselytization by the protestants. On top of that the communist threat also weighed heavily on the pontiff and his top men. The Pope also realized his curbed powers after the Italian State had taken over the papal states half a century ago. The Pope sought freedom from his imprisonment in the Vatican, and also wanted political support for his own religious campaigns. It was a marriage of convenience, both had their own agenda. After frantic negotiations both the Church and the fascist Italian state signed the Lateran accords.

The Lateran accords signed in 1929, gave the church much needed financial benefits and a say in the government and in return Mussolini got public support of the Holy See. The Church's unequivocal support created a cult of personality of Mussolini, he got a demi god status. The Pope was now able to move about freely, separation of the church and state was a thing of the past. Religious teachings were back at school, cash was flowing to the church and any book/piece of art even slightly critical of the church was banned. 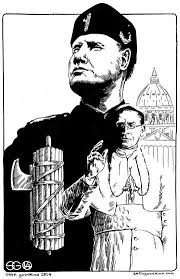 The story of this happy marriage begins to turn bitter when Mussolini aligned with the fuhrer. The Nazis were staunch nationalists and propagated their theory of racial superiority, they believed in the supremacy of the golden haired, blue eyed and the fair skinned Aryans, Church opposed this idea and thus began the persecution of the church in Germany. Animosity began to further grow between the Pope and Mussolini when anti antisemitism became a state policy. The pope saw Mussolini bending more and more towards Nazi Germany, the pope hated Hitler and the Nazis. Mussolini wanted to emulate Hitler and build a Reich of his own, Mussolini thrust Italy to war with Ethiopia. Italy won the war but suffered heavy casualties. The Clergy and the fascist declared it as a great victory and hailed Mussolini as a conqueror.

The Holy father gave a tacit approval to many of Mussolini's controversial campaigns, other members of the clergy were less circumspect when it came to Mussolini. They cheered him on his new found antisemitism, even when he had a Jewish mistress.  The Church and clergy were willing partners in war crimes and human rights abuses/genocide in Ethiopia and Italy.

The book is a brilliant account of Italian history in those upheaval times. It goes into details of the life of the Pope, his close associates. Mussolini and his party bosses. The author also uncovers this yet unknown nexus between the fascists and the church, to the embarrassment of the church, the book uncovers politics and greed in the Church's affairs. A very readable, informative and intriguing history with impeccable research. Well deserved Pulitzer.

I would like to conclude this book review by stating that the author and history see Pius XI in a very negative light because of his association with Mussolini. In fact I think Pius XI tried to make the best of the situation he was dealt. He increased the power and influence of the church by all means at his disposal for this he entered into a deal with the devil. Some people even say that the devil in this case was coaxed by an even more perfidious devil(Hitler).

Pius, never supported antisemitism, in fact he opposed it vehemently. Sometimes, even the voice of the most powerful are subdued by their own followers. He was against war and supported his own people whenever, wherever they were persecuted. 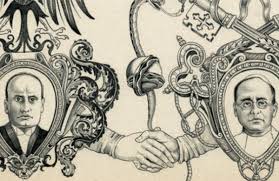