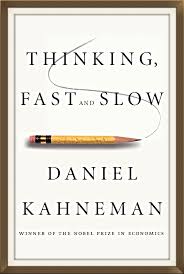 Daniel Kahneman, is a Noble prize winning psychologist. In his book Thinking Fast and Slow, he delves into the human psyche of decision making. The author devises two systems of our brain for our understanding. System 1 is driven by intuition, makes rapid decisions and takes less energy and effort, System 2 on the other hand is driven by slow but critical thinking, and it takes a lot of energy and mental resources. We live most of our lives depended on System 1 and System 2 is rarely invoked. The book shows experiment after experiment which prove conclusively that most of the time for most of the people System 1 makes our decisions for us at the cost of saving resources.

You see system 1 in action when you:

Detect one object is more distant than another
Orient to the source of a sudden sound
Detect hostility in a voice
Drive a car on an empty road
Answer 2+2 = ?
Read words on a large billboard
Complete the phrase "bread and ......"

System 1 is our automatic choice, who is always in the driver's seat. System 2 is invoked when we have to do deep thinking, something complex or something new. When we have to put some thought behind our actions. The book also points out how we take illusions as real, for e.g. in the Muller Lyer illusion:

on seeing the two lines we obviously can make out that first one is longer than second, but if we look at it with more attention (invoking system 2), one can make out that both are of the exact same length, but the direction of the arrow makes the first one look longer.

Author points out that several studies have shown that people who are simultaneously challenged by a demanding cognitive task and by a temptation are more likely to yield to that temptation. This is because self control and deliberate thought draw from the same budget of limited effort. Thus one leads to the other, not because we are weak but because we are human. Our capacities are limited. Effort of will or self control is tiring; if you have had to force yourself to do something. you are less wiling or less able to exert self control when the next challenge comes along this phenomenon is called ego depletion.

Look at the following two words:

A lot happened during the last 1 second or two, including you imagining unpleasant scenarios and making a 'disgust face'. Do you realize the power of System 1? by just seeing two words mentioned side to side on a book blog, your mind made you think about something unpleasant and you even reacted to that physically.  This is priming, which is associating. Another interesting phenomenon, about which you can read more in the book.

Editor of the book is simply marvelous, book is divided into little chapters with nuggets of information. Easy to read and understand even for a novice like me. Although some examples in the end chapters about gambling and decision making are quite boring and a little tough to understand. Also you have to go through the book in several sittings, one cannot just finish it easily, sort of becomes an arduous read. It has enough to keep you hooked though for e.g. how to write a persuasive message:

There is so much packed in this book, its difficult to summarize everything in this little old blog; I'm trying to put the pieces which I found to be most capturing. Someone else might come up with an entirely different summary because of the sheer size of smorgasbord of information in this book.
System 1 is a machine for jumping to conclusions. The initial attempt to believe something is a automatic response of System 1. System 2 is in charge of being skeptical but is often busy or mostly lazy! several studies have shown when we are tired or depleted, we tend to believe in commercials and persuasive messages. This is also related to the Halo effect, which is liking or disliking everything about a person including things you have not observed. For e.g. A historical figure was always kind to children and loved dogs. Out of Gandhi and Hitler - who could this person be? The answer that comes to mind is Gandhi, as he was a benevolent, kind soul, who led a non violent struggle against the British; but do we really know how Gandhi was with children and dogs? We automatically assume that it has to be the sage from India who would love children and dog, how can it be the genocidal German dictator? In truth, humans are more complex and we are not the rational beings we think ourselves to be. Hitler indeed did love Dogs and little children.

Availability bias is another compelling topic. In a study spouses were asked "How large was your contribution to keeping the place tidy?" as expected self assessed contributions added up to more than 100%. The explanation is availability bias. both remember their own contribution more clearly than those of others, and the difference in availability leads to a difference in judged frequency. The same applies to team members working on a project. Thus, we hear people complain of how they are never recognized.

Something different for me to read, and educative. Will try out more books in the future from this topic.

Email ThisBlogThis!Share to TwitterShare to FacebookShare to Pinterest
Labels: Psychology