Between Military and Mosque by Husain Haqqani 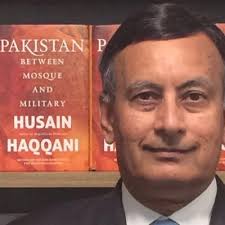 Husain Haqani is Pakistan's former ambassador to USA, he is also an erudite on the subject of Pakistani politics and History. Through this book the author takes us through the history of Pakistan over the last 7 decades. The influence of religion and Military on Pakistan and how these two institutions have shaped Pakistan for good or bad and will continue to do so for decades to come.

Pakistan throughout it's history has had an arduous existence. From a dearth of resources, hostile neighbors and to a struggling economy. Pakistan has had to deal with a multitude of complex problem some of them her own creation. In fact the idea of Pakistan, as a separate state for Muslims, is in itself a misnomer since there are more Muslims in India than Pakistan.  The author enlightens the reader on Pakistan's three pronged approach to counter these myriad of problems.

A) Perpetual hostility towards India, Pakistan views Kashmir as an unfinished business of partition and feels it was cheated of it's territory. After India orchestrated the split of East Pakistan from the west, this enmity grew further.

B) Islam as the unifying force, Pakistan was created in haste and in this haste a lot of different and incompatible sections of the populace were brought together be it the Bengalis, Baloch, Sindhis, Afghans and Punjabis etc. Pakistan has tried to keep everyone under the prodigious umbrella of Islam.

C) Reliance on an external benefactor - Pakistan quite early in its history recognized the importance of USA; Pakistan started vowing USA. Pakistani diplomats and generals started deftly coaxing large sums of money from America. Pakistan a third world country maintains a first class military and to sustain its military expenses it looks to USA, China and Saudi Arabia to foot the bill. In return the Pakistanis act as bases for these countries to wage war. The author goes into much details about this in his book.


The author is deeply critical of his own nation and exposes the nexus between the Military and the Mosque, they have a symbiotic relationship, feeding off each other. These two together control an entire country. Pakistan has spent more years under military dictators then civilian governments starting from  Ayub Khan in 1958, continuing with the genocidal Yayha Kahn in 1969 and the zealot Zia Ul Haq in 1977, ending with the recently deposed Perzez Musharaff who took power in a coup in 1999.

The civilian governments have also been controlled directly or indirectly by the Military. None of the civilian rulers were allowed to grow bigger than the military. One person who did seems to be moving out of the Military's shadow was Zulfikar Ali Bhutto, who was deposed in a coup by the religious zealot Zia and executed. Later his daughter Benazir who wanted to break free from the military was also executed, rumor has it that it was the ISI, the dreaded Pakistani Army Intelligence agency, behind her assassination. The author neither denies or confirms this rumor. These puppet governments have never had a free hand to run their own governments and are perpetually under surveillance by the ISI who has several techniques by which they can disrupt or dislodge governments if they don't comply with the military.

I find that the author is not only deeply critical but also anguished at the state of his homeland. He suggests various endeavors which if undertaken can lead to rapid changes. For e.g. deescalation of hostilities with India, this will lead to a cut in the power supply to the Army which feeds off from Pakistan's perpetual enmity with India, this will in turn lead to a cut in the armed forces on both sides and the same funds can be used in education, health and development etc. Also, Move away from being an Ideological state to a functional state i.e. focus on tasks, economy and people rather than religion.

I find the subject of Pakistan to be fascinating, its like watching a train wreck difficult to look away. On a serious and more important note, we need Pakistan to turn around because in their prosperity lies the future of this region. To explain this with a real estate analogy, on a street if you own a castle but the house next to you is dilapidated then no one will buy your castle or it will be humbly priced. So, we should work together to improve our neighborhood. Pakistan need not reach out to China or USA, redemption is much closer.

Brilliant work by Mr. Haqqani. Politics, history and social commentary all rolled into one. Must read!