The Missionary Position by Christopher Hitchens

There are two types of intellectuals in this world. The first, is the intellectual for plebeians, who can speak eloquently, explain complex things to us in simple terms and never seem arrogant. The second, is the intellectual for patricians, those who study Hindu Mythology, quote Greek philosophy and when generally they appear on TV or you tube make us look like neanderthals.  This book is written by an intellectual of the latter pedigree. The indomitable Christoper Hitchens. 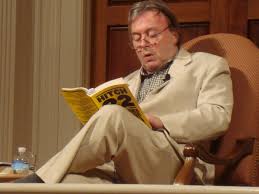 On Hitch's passing away, Sam Harris, one of the leading intellectual lights of our times said about Hitch "The man had more wit, style and substance than a few civilizations I could name". Hitch was an Atheist. He fought his entire life against the evils of religion and theocracy. Hitch made a career out of going after the sanctimonious. In this book Mother Teresa comes under his fire.

Hitch describes Teresa as a religious fanatic, whose religious zealous fervor did more harm than good. Staunchly anti-abortionist, Teresa proclaimed on many occasions how abortion is a sin in the eyes of the all powerful god. Teresa also used her position among st the believers to further strengthen the position of the church and the pope. Teresa and the pope were often ready to look the other way when they were being supported by a dictator if it was a Catholic dictator of course.


Teresa is not accused by the author of any financial wrong doings but she is accused of denying her patrons care and facilities that she could have afforded. This was not because she was a miser but because she felt that the poor under her care are supposed to suffer like Jesus Christ did. This woman believed that through suffering and pain, these people will come close to Christ. This is not the only crime she allegedly perpetrated. She is also accused of converting Muslims and Hindus in their final hours in her Missionaries of charity home in Calcutta.

Hitch and some of Teresa's ex associates have also brought forward another disturbing issue to light which is that the workers at her institute had blatant disregard for standard health and medical practices like sterilizing needles which instead of controlling diseases led to dire consequences for patients.

Mother Teresa has recently been canonized by the Vatican, she is revered as a miracle worker. Some of her miracles are also questioned in this short book. In fact the person who witnesses the miracle has also called it a fraud.

The jury is out on Mother Teresa and her missionaries of charity, I think the book is overtly critical of her but that is Hitch's style and his mission in life was to make us think about idolatry. He manages to succeed in that.

Book is very short you can read in one sitting, although the language is definitely top notch and you have to sit with a dictionary; Some of the references are also lost on the casual reader.