All The Lonely People by Martin Edwards 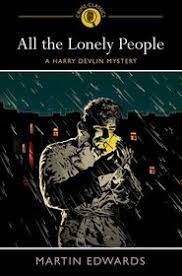 Plot: Henry Devlin, is a solicitor who lives alone in his humble abode in Liverpool. One day when he comes back home he has an unexpected visitor. This visitor is the beautiful Liz, Henry's estranged wife, whom he has not heard from in two years. Liz cheated on Henry and left him as an emotional wreck when she walked out on their marriage. Henry is still in love with Liz and aches for her to get back with him. The amorous Liz informs Henry that she has dumped her lover and is now in a relationship with another man. Henry sees his chance and hopes that the two of them can reconcile, but Liz gets murdered she is stabbed several times and left to die. The police make Henry the number one suspect, the solicitor has to now not only prove that he is innocent but also find out who murdered his wife. In his quest Henry will discover that his wife had a most disturbing and tumultuous past.

The first in the Henry Devlin series, "All The Lonely People" was written in 1991 and is perhaps one of his most well known books. Edwards is a powerful writer, his writing transports the user right in the middle of the story, while reading I realized that the range of emotions and vivid descriptions that Edwards is able to project in his story would be very hard to replicate in a movie or a television series. Edwards shows the dirty underbelly of Liverpool, and transfers the reader to the declining city. Edwards writing is unlike some of the other modern writers like Colin Dexter or PD James, the vocabulary used in "All The Lonely People" is simple and yet intelligent. 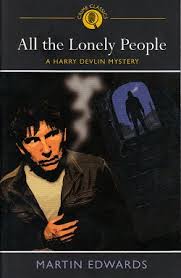 The writer keeps a somber mood throughout his tale of murder. Henry plays detective and keeps reminding the reader of his wife and the good times that he had with her, this proves futile as the character of Liz does not gain much sympathy, she is a promiscuous, adulterous, ignoble seductress who is willing to hop in bed with anyone and everyone regardless of her relationship with them. Even the protagonist of this tale tends to get on your nerves, his wife has more affairs than UPA goverment's corruption scams but he remains fascinated with her, and in the process loses all respect. Liz has an affair with her brother in law, a rough neck, a rich criminal, a married club owner, tries to seduce his husband's partner and to top it off sleeps with a midget out of pity! of course all the men that she slept with become suspects.

In spite of the absurd behavior of the lead pair, the book is not a drag and is quite readable. The book is only 250 odd pages and is a "time pass" if you are looking to read something different from the classic mysteries. The identity of the murderer is well hidden and is quite tough to workout, a lot of clues are hidden from the reader, which leads to incorrect deductions. I'm rating this 2 and half stars out of 5.

Where can you buy it? Homeshop18.com/FlipKart/Infibeam for around Rs 500.