I was having a discussion with one of my cousins over the best English whodunits/murder mysteries. We both came up with our lists and I thought it would be nice to share it with a broader audience. 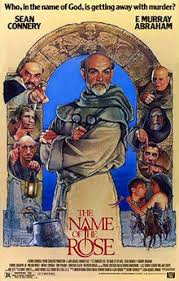 10. The Name of the Rose - Starring Sean Connery as a detective monk, this movie is based on a novel by  Umberto Eco. William of Baskerville and his novice Adso of Melk travel to a monastery in Northern Italy to attend a theological debate. As they arrive, the monastery is disturbed by a suicide. As the story unfolds, several other monks die under mysterious circumstances. William is tasked by the Abbot of the monastery to investigate the deaths as fresh clues with each murder victim lead William to dead ends and new clues. The protagonists explore a labyrinthine medieval library, discuss the subversive power of laughter, and come face to face with the Inquisition. The scene in the labyrinthine library and the motive for the murders are truly awesome! 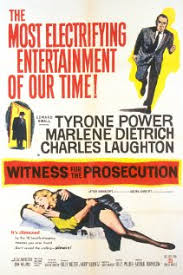 9. Witness for the Prosecution - Written by the Queen of Crime, an American living in London, Leonard Vole stands accused of murdering his older benefactress shortly after her will is changed in his favor. Barrister Wilfrid Robarts (Laughton) agrees to take the case, even though he’s recovering from heart trouble and should be avoiding the excitement of a high-profile murder trial. The evidence seems strong against Vole, but his German wife (Dietrich), a clever, mysterious former cabaret performer, steps forward and provides an alibi. Sir Wilfrid has his doubts, which prove prophetic when the wife turns up as a witness for the prosecution, all but shattering his case. The canny barrister finds a way to save his client initially, but there are quite a few more satisfying plot twists and great surprises before we reach the end of the tale. 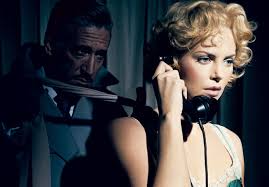 8. Dial M for Murder - Grace Kelly, Htichcock, what else do you need?. Another great and involving film from Hitchcock. Near perfect timing, fantastic acting and a brilliant narrative. At first I thought that revealing the murderer and his tactics would be extremely detrimental to the film, however as it went on the tension built up as although we knew what had been planned, we didn't know what would actually happen. Definitely recommend! 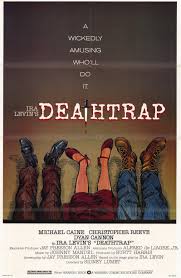 7. Deathtrap - "Man (Christopher Reeve) writes play. Older washed-up hack (the blissfully hammy Michael Caine) covets play. A meeting is arranged in a remote cabin festooned with various sharp objects. To reveal anything more would serve to ruin one of the most wondrously convoluted plots of the '80s and '90s. It's a cerebrum-bending romp from start to finish, with marvelously airtight plotting that simultaneously parodies and honors its genre, and two vibrant, continuously morphing lead performances (pity poor Dyan Cannon's weak-link wife, though, who gets stuck with the shrillest character and worst dialogue of the lot). Based on Ira Levin's long-running play, this adaptation's rhythm is thrown off a bit by director Sidney Lumet's somewhat misguided attempts to open it up for the screen, but the script and performers are so playfully adept that, as one of the characters says, "even a gifted director (which Lumet most certainly is, based on evidence such as Dog Day Afternoon and Network) couldn't hurt it." Delirious, nasty fun that's twistier than a corkscrew and loaded with enough red herrings to keep Flipper fed for a year." - Andrew Wright


6. Sleuth - Milo Tindle and Andrew Wyke have something in common, Andrew's wife. In an attempt to find a way out of this without costing Andrew a fortune in alimony, he suggests Milo pretend to rob his house and let him claim the insurance on the stolen jewelry. The problem is that they don't really like each other and each cannot avoid the zinger on the other. The plot has many shifts in which the advantage shifts between Milo and Andrew. - imbd 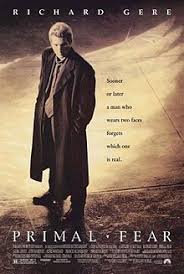 5. Primal Fear - Edward Norton, an Altar boy is accused of murdering a priest and Richard Gere defends him in this mystery of dual personalities and murder. Norton, aptly supported by Richard Gere, outshines the rest of the cast and puts in a performance of a life time. One of those movies which you can watch multiple times. 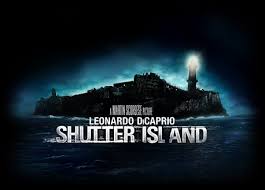 4. Shutter Island - It's 1954, U.S. marshal Teddy Daniels is assigned to investigate the disappearance of a patient from Boston's Shutter Island Ashecliffe Hospital. He's been pushing for an assignment on the island for personal reasons, but before long he wonders whether he hasn't been brought there as part of a twisted plot by hospital doctors whose radical treatments range from unethical to illegal to downright sinister. Teddy's shrewd investigating skills soon provide a promising lead, but the hospital refuses him access to records he suspects would break the case wide open. As a hurricane cuts off communication with the mainland, more dangerous criminals "escape" in the confusion, and the puzzling, improbable clues multiply, Teddy begins to doubt everything - his memory, his partner, even his own sanity. 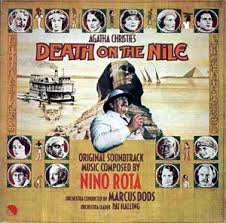 3. Death on the Nile - Adapted from the book written by Agatha Christie, this quintessential whodunit boasts of a long list of celebrity suspects, a Belgian detective and murder on a luxury cruise on the river Nile. 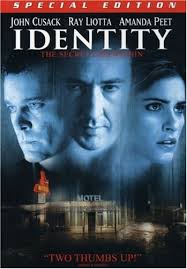 2. Identity - Stranded at a desolate Nevada motel during a nasty rainstorm, ten strangers become acquainted with each, soon they realize they may be at the motel for another reason when one by one, people start getting killed off. As tensions flare and fingers are pointed, they have to get to the bottom of why they're there. John Cusack stars in this psychological mystery inspired by ATTWN. 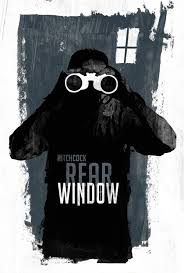 1. Rear Window - Another masterpiece from the master of suspense, starring the graceful Grace Kelly and probably one of the greatest actors of all time James Stewart as the Professional photographer L.B. "Jeff" Jeffries. Jeff breaks his leg while getting an action shot at an auto race. Confined to his New York apartment, he spends his time looking out of the rear window "observing" the neighbours. He begins to suspect that the man opposite may have murdered his wife. Jeff enlists the help of his society model girlfriend Lisa Fremont and his nurse Stella to investigate.